Wow, I can't believe July was the last time I updated my blog. But, I do know that the sampler that I just finished took forever to do.
I am babysitting three small children this school year. The oldest turned 3 in Oct. The second one will be 3 in April. The baby will be a year in March. Yes, I am kept very busy most days!
The sampler that I just finished is for our youngest son & his wife. They just became parents on Sat. What a wonderful experience. We were able to hold the precious babe just a few hours after she was born.
We are in the thick of preparations for Christmas. I tried so hard to be done before Dec. 1st hit, but that was just impossible with the schedule that I keep! I am doing well thou, for having over a week left!
I would like to wish everyone a very Merry Christmas!!!! 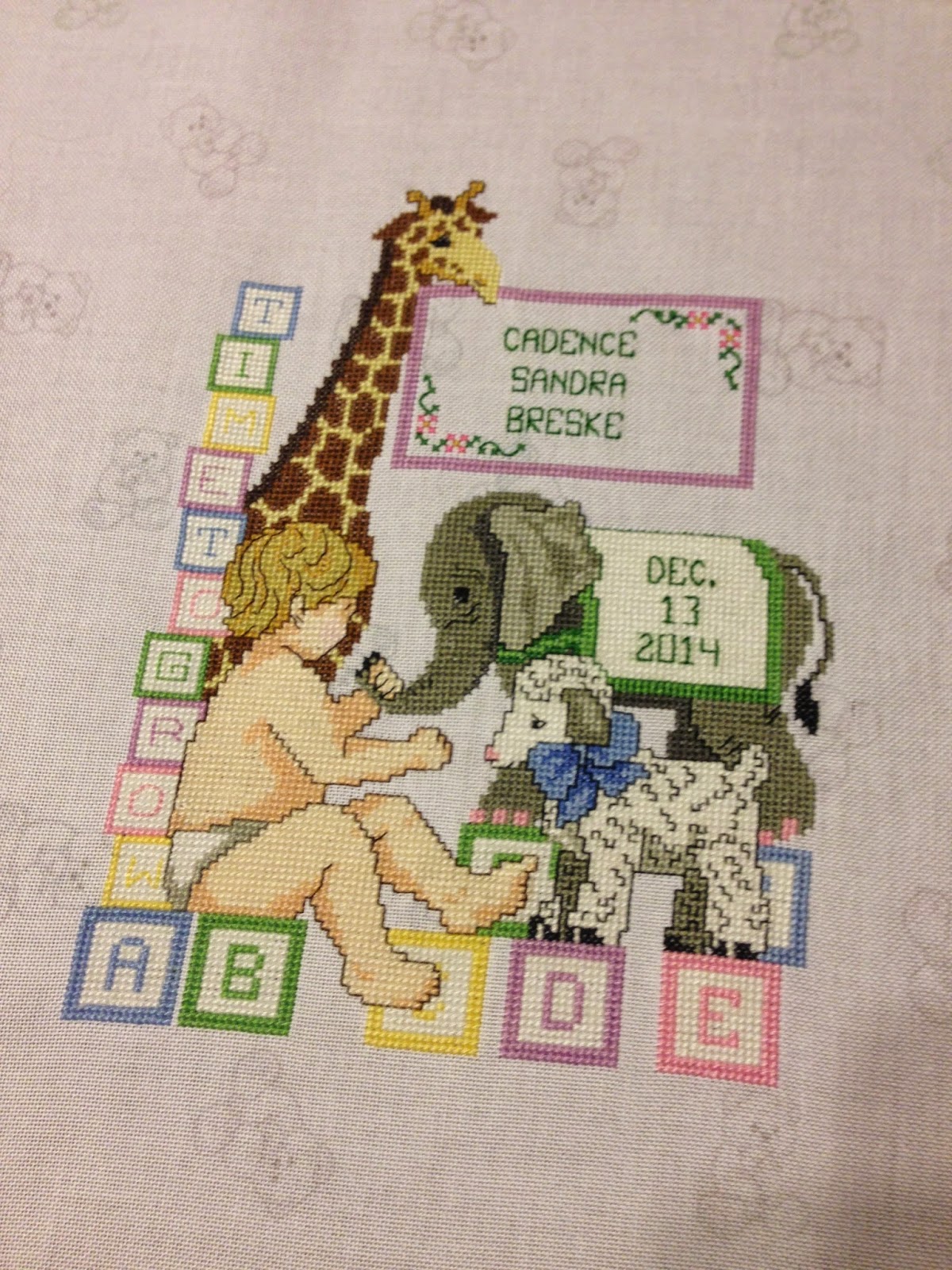 Happy July........
July is one of my favorite months for several reasons. I cannot believe we are already a week into July. This summer is flying by faster than ever.
SO MUCH has happened since my last post in March. I won't bore you with everything, but I must update on a few things.
We lost my sweet mom mid June. Her heart just finally gave up. She suffered three mini strokes in May. We almost lost her at that time. She went home after a long hospital stay just a couple days after Mother's Day. She spent her last month hooked up to oxygen, sitting in her chair most of the time. She is now pain free. (she had lived with rhumatoid (sp) arthritis for nearly 50 years.
Before she had her last set back, mom was almost finished with a cross stitch project. When we went up to plan her celebration of life service, my dad asked if I would finish the project. I said I sure would. Well, at her viewing, he asked if I could have it finished for the service the next day. I said I thought I could. You DO NOT challenge me in that way. If it is at all possible, I will make it happen. And, I did! I put the last few stitches in it, on the way up there that day. Dad laid the piece beside mom in her casket. After the service was over, he walked over & got it out & handed it to me. He said he wanted me to have it. So, I am waiting for my framer (my husband!!!) to make a frame for it.
As far as my own stitching, I have been working on the frosty friends series. I have just finished the 3rd block & decided I needed a break from all of the white.
I do not have a picture yet, but I am working on a My Big Toe piece that I started a while back.
I am going to keep this short because I need to get moving. I hope you all have a wonderful day & week!
HAPPY JULY!!!

Oh my!!!!! It has been 2 months since my last post.
Before ANYTHING else, I MUST update you on my mom!!!! Such wonderful news! We went, as a family, to the cancer doctor at the end of January, for what we are now calling 'her death sentence visit'. You see, she had been told if the tests came back, as they saw on the films, she probably only had 3 or 4 good months left.
Well, after many, many tests & procedures & finally, surgery, SHE IS CANCER FREE!!!!!!! What all the films were showing was some sort of infection in her lung. When the surgeon got in there to remove the tumor, there was no tumor. We are all saying this was a miracle from the Lord & we are thanking Him! She will be seeing another specialist to see if they can figure out for sure what the infection was/is.
Onto stitching......
my stitching has been hit or miss with all of the stuff going on with mom & with my Thirty One business. I am really pushing myself to make a go of it. I just had my one year anniversary with them & I am still loving it as much as I did when I joined. I am super excited about my new stitching bag. I will be posting a picture of it here!
I just finished the first part of the Frosty Friends series by CCN. I am loving it!
I have also worked on a few ornaments & a few WIP's, but don't have pictures of everything.
Have a great day & thanks for stopping by!!!!! 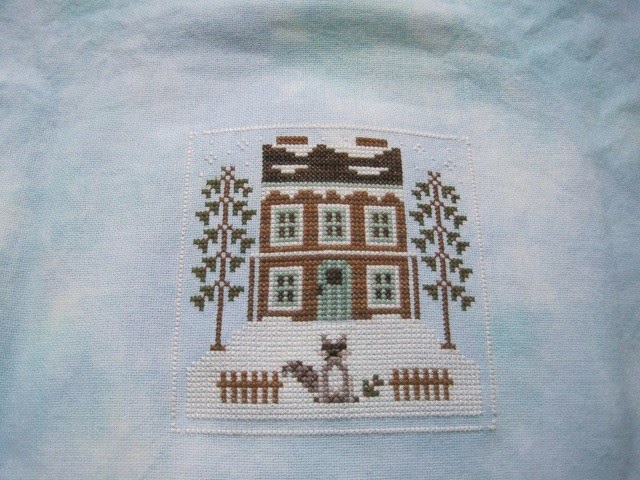 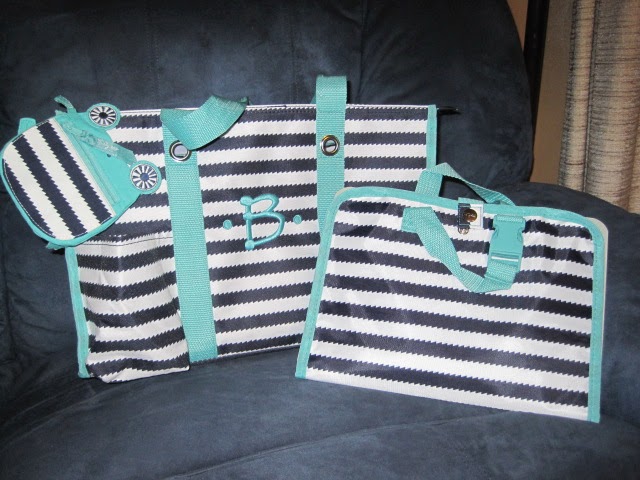 good morning,
Normally, I would not be home right now. Normally, I would be at church on Sunday morning. But, we are having quite the winter. Other than picking my husband up at the airport on Tues. evening, I haven't been out of the house for a week. That is so unusual for me. I am not a sit home all the time person. But, the older I get, the less I like being out in the elements of winter!!!
I have finished two pieces since my last update. I was not able to update after the first finish, because my computer had crashed.
My husband was gone for 5 days, helping our son move. He is in the Army & his location got changed. So, they had nice father/son time......packing up his house & driving to the new location. Our son took him to the airport there & I picked him up here. It was 50+ degrees when he left our son & it was 3 degrees when I picked him up! Welcome back to the cold north!!!!
After he got back home, he worked on my computer & he got it back up & running......yeah!!!!! So thankful to have my regular computer with all of my contacts & passwords, etc.....
I decided to pull out some of the ornaments that needed done. I had done 3 of the PS 12 days of Christmas, but still had 9 to go! Well, I now have two more done. I think I will work on another one this morning, since I normally wouldn't be here, so I can use that time for stitching!
We were given quite a blow this week. My mom hasn't been feeling real well since November. She went to the family doctor with her concerns. Part of her thought maybe it was depression, from losing my brother in Sept. The doctor told her it very well could be that, but he wanted to run other tests before giving her depression meds. Well, long story short.....they have run all sorts of tests. The latest was a biopsy on Friday. They will get the results probably tomorrow, but it appears she has cancer in her lung, her lymph nodes & her esophogus. (sp) Even before the biopsy, the cancer doctor has told her she probably only has 3-4 good health months left. We will have a family meeting with the cancer doctor later in the week.
Ok, I am now frozen from sitting here at the computer & from thinking about that, so I will get this posted & get moving to warm up.
Oh, part of why I am frozen........we are on propane & there is a huge shortage in the midwest. So, we have turned our heat down, to do our part in conserving. Prices have gone thru the roof & we are only allowed a small amount of propane....with having to pay before delivery.
COME ON SPRING!!!!!!!!!!!!!!! 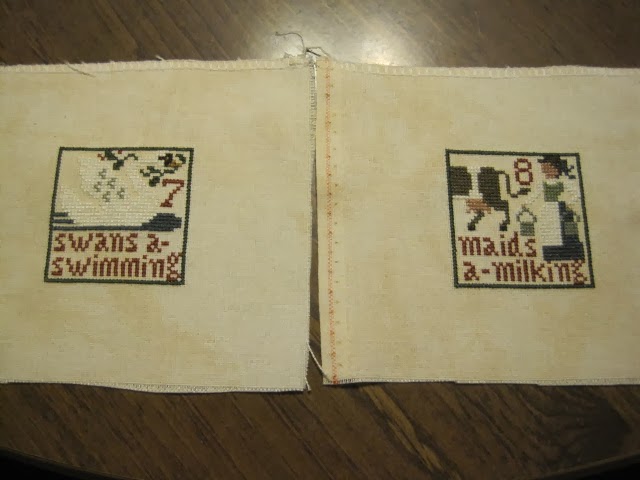 Well, as promised, I worked on my January ornament as soon as I finished the Home for the Holidays piece. I had picked out several ornaments in the Just Cross Stitch Ornament issue, so it was just a matter of which one to do first. I decided on Let it Snow by Plum Pudding NeedleArt. I have always liked Barb's designs & this one didn't fail me!!! I stitched it on a 32 ct piece of Zepher lugana from Picture this Plus, using the called for flosses. I will finish it the way she showed in the magazine.
I am also posting a picture of the gifts that I got in a 12 days of Christmas exchange that I was involved with. Vickie knows my stitching likes pretty well, so she sent me some great gifts. She even made me an Ort container!!!! I love it!
I am posting pictures of the other 2 pieces that I worked on during the 3 months that I didn't update. As you can see, I didn't do a whole lot on either of them. The leaf is mostly done with a blended needle, so it is time consuming, but it will be gorgeous when it is finished.
I think I am going to go back to the Bethlehem piece now for a while & see if I can make some progress!!!
Have a great weekend.....I hope the snow stops & the roads clear up around here. I haven't been out of the house since Sunday morning & won't be again tomorrow, because the roads are awful this evening....

Wow, it has been nearly 3 months since I last posted! I know I haven't gotten much stitching done, but wow...still hard to believe it has been so long!
I have started 3 projects in that time frame. One is a gorgeous leaf pattern from Heritage Stitchcrafts in the UK..( I hope I spelled that right) One is a Bethlehem piece that I saw on the 123 message board. The other is the one I am going to show today! It is finished, as of last night. I put the buttons on it this afternoon. It is Shepherd's Bush "home for the holidays". I enjoyed stitching this one! I had the cottage done before Christmas, but the rest still needed stitched. We had the boys here for 8 days after Christmas, so I was thankful for easy stitching while they played. I obviously  didn't get much done, but at least I accomplished some! 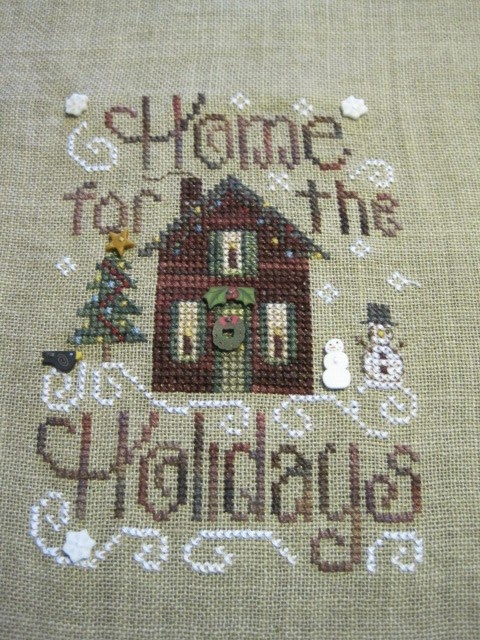 If you read my last post, you read that my brother passed away & I was finishing one of his unfinished pieces.
I finished the little mouse last night. It turned out cute & this is one of those pieces that needed the backstitching to make it happen! It was just a blob without it!
I learned something about Wayne as I worked on this piece. He & I stitched differently! He did his X's one way, and I a different way. I don't know if there truly is a right way & a wrong way to stitch, just different! My mom wants this piece, so I told her this. She said it will be fine......it will show that both of us worked on it, our way!
My nephew has also found all of Wayne's "Kinkaide/Disney" kits. He had purchased a bunch of them, but the only one started was the Pinocchio. My dad has asked to keep the Snow White & Lion King & I get the rest of them. ( Too funny, but I already own the 2 he asked to keep!!!)
Today, I will start on a fun fall freebie I found.
Last Sat, we, along with my parents & my sister & her family went to a state park that we all love. Oh my!!!!! The colors are really just starting, but it was gorgeous!!  The weather was perfect for a day in the outdoors. I will attach a couple of my favorite pictures....... One is the wooly bears the kids made at the nature center!

Shari
I have been stitching for over 25 years, but only seriously for the past 10 or so. I have really gotten serious since I joined some yahoo groups. The ladies are great at encouraging me to continue on & to try new things. I hope someday, that my stitched pieces will be a remembrance of me for those who end up with them!